French director Alfred Machin (1877-1929) was sent to Belgium by the French firm Pathé in 1912 to start up a film studio, Belge-Cinéma-Film. Next to his magnum opus, Maudite soit la guerre (1913), he made over twenty short and medium length films. In order to cater for local audiences, he gave his films a certain couleur locale. This is obvious in his short films Saïda a enlevé Manneken Pis (Saïda stole Manneken Pis, 1913) and Mr. Beulemeester, garde civique (Mr. Beulemeester, Civil Guard, 1913). Before pioneering in Belgium, Machin had worked in France, Central Africa and The Netherlands (Volendam). On the eve of the Great War, he returned to France to join the French Army. 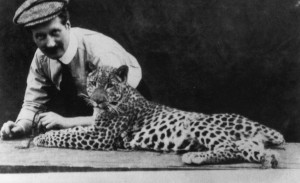 Film director Alfred Machin and his favourite leopard Mimir, which he had brought from his hunting trip to Africa in 1909.