Although the armistice was signed on 11 November 1918, for the Belgian people the true end of the War was marked by the return of the Royal Family in the capital of Brussels on 22 November. A military parade by over 6000 Belgian and allied soldiers and a series of ten temporary monuments scattered around the city along the route of the cortege, added luster to the grand tour taken by King Albert I, Queen Elisabeth and their Children.

This film was made by a camera man of the American Red Cross and was offered as a gift to King Albert afterwards. 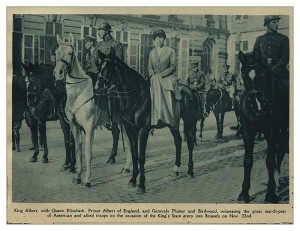